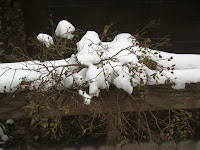 It is officially winter. As I look out the windows, the first snow of the season lingers. It clings to tree branches, covers roofs, frosts the fence tops. It makes me wonder if the clouds and sky conspired to wash away the grime and prepare for a new year. Familiar words float into mind—fast away the old year passes…

Some years, I’m not ready to say goodbye to the old year, whether because I’m feeling too rushed, or I sense that life in general is passing by too quickly. Some years, I want the nearly-ended year to linger like this snow has, to stay with me awhile longer.

This year, I’m celebrating. Fast away? Yes. Please. Fa, la. While 2009 has had some lovely moments, it’s also been extremely challenging. So I’d like a fresh, new year, please. Clean and unspoiled like a snow-covered meadow. This year has required of me one, very difficult task: learning patience. And patience is not one of my natural assets.

I’ve experienced some eye trouble—retinal bleeding. The cause is known and not particularly dangerous in my case but the effects have been difficult. Most particularly, I have not been able to see with my left eye since August. Slowly, very slowly, the blood begins to clear and peeps of the world sneak through. Therefore the patience… In the meantime, I’ve had to adjust to a narrowed view of the world and have had to learn how not to bump into things.
Because I’m a writer, when I struggle with something, I often put words down, to try to understand, or if not understand, then simply dump out the frustration. Here’s a poem I wrote when the trouble first began.

So as the old year passes, here are my resolutions: hail the new, fresh beginnings, more snow. Look out at the world in wonder, both eyes wide. Exercise patience. Write more poems. Cheers for 2010.

if you didn’t look closely—

but she is no creature

of orange rind and sugar

same fight or another?

I know when she’s visited

I watch her move—slinking, shadowy—

feline grace on all four paws

extra balance in the gift of a tail

last Sunday I had eye surgeries

with cryo and laser and I am now that

I stumble, stagger in my own shadows

the gift of a tail