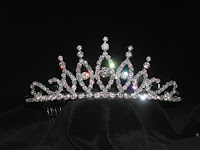 My first Prince was really a King. I was six years old, a first grader. Small town Ohio loves its football, so Homecoming was a major celebration. In the usual way of things, there was a Homecoming Queen and King, both seniors, with attendants from all the other high school classes. And then there was me, in full fancy dress—with a green shiny pillow to match my long green shiny dress—and I got to carry the Queen’s crown.

I was probably cute enough, but I’m sure I was chosen because my father was something of a town celebrity—the young, fun pastor who had a good rapport with the kids. He and my mother would be chaperones for the Senior Trip later that year—so they were surely better known than I was. But for me, this was a major Princess event. Long dress, a parade. And of course I was completely in love with the King. In my little girl mind, he was my King. I wasn’t simply the crown bearer, but the Queen herself. Royalty. Ruler of the Known Universe. I somehow simply erased the real Queen from my mind.

All of this comes to mind as we watch and enjoy the spectacle of a royal wedding. A real Prince and a real Princess—with plenty of smiles and it seems, a sense of humor. In this country, we’ve mostly left royalty behind, unless you count rock stars and sports heroes. But we do enjoy that Prince and Princess moment. Long dresses. Crowns. Fancy coaches. And a moment to dream, imagine, remember, the royal moments of our own.